Article // Why Money Makes the World Go Round 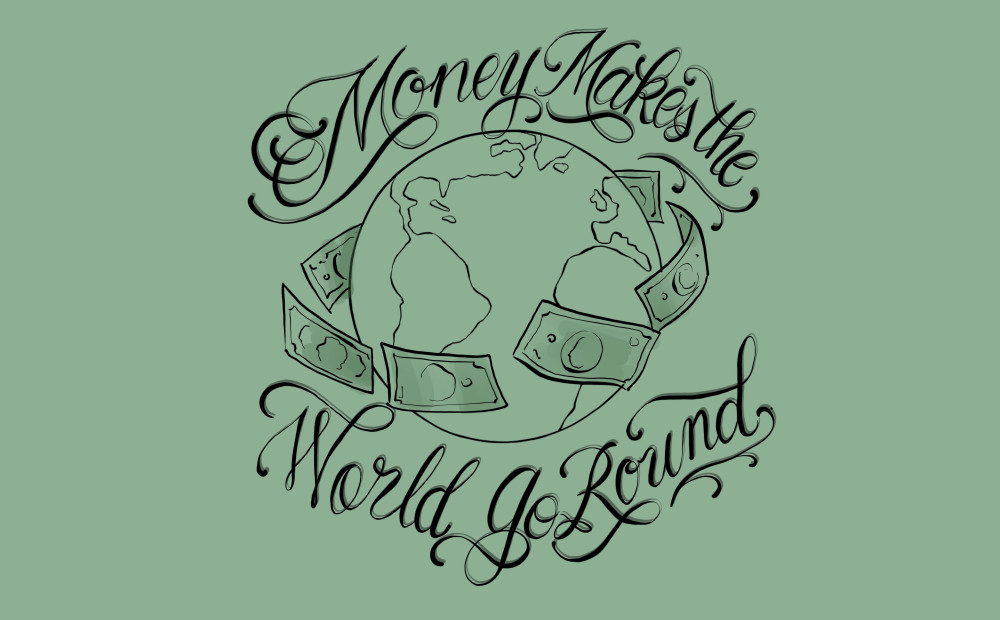 This article was written by Nadjeschda Taranczewski and Peter Koenig, the creator of the moneywork process. It was published in two parts on Medium: Part 1 on June 26, 2020 and Part 2 on July 5 2020.

Money is a projection screen

Even if it often appears otherwise in everyday life, money is only one thing: a medium – physical or virtual – on to which we project, as if onto a neutral screen, our fantasies, desires, and insecurities. You may think this is a bold statement, given that you know for a fact you need money to pay your rent or mortgage, to buy food, to pay for your holiday. So, what do we mean when we say that money exists in this way and functions through the process of projection?

The object which we call Money has its own intrinsic value as being an object in its own right. Its separate monetary value only comes into existence through human projection. We agree that it qualifies as money: how much of it there is and how much of it you need to acquire something else for it. Money therefore has no intrinsic worth of its own and in a sense does not exist. At best, we are looking at a piece of printed paper or embossed metal, or, as is more often the case these days, we look at zeros on a computer. In another way, money might be viewed as a promise and only works if we collectively trust in and value this promise. It is a cultural construction that functions through projection that we treat as if it were a law of nature.

In contrast, laws of nature are something that man did not invent and that applies equally to all of us, everywhere – whether I believe in laws of nature or not. Unlike money, the role and effect of gravity or radioactivity is not negotiable. But since money is a human invention functioning through collective projection, the assigned value and meaning of money is absolutely negotiable. Since we seem to have forgotten this, we pretend that money is as real as gravity or radioactivity.

To quote Yuval Noah Harari ‘Money is not coins and banknotes. Money is anything that people are willing to use in order to represent systematically the value of other things for the purpose of exchanging goods and services…Money was created many times in many places. Its development required no technological breakthroughs – it was a purely mental revolution. It involved the creation of a new inter-subjective reality that exists solely in people’s shared imagination.’

If you are interested to learn more about the history of money, we suggest Yuval Noah Harari’s thought-provoking compilation named Money or this insightful article in the German WirtschaftsWoche (in German only) on credit.

It is impossible for us to not create projections

Today we know from brain research that what we experience as reality is an internal creation or, in other words, a projection of our consciousness.

Our mind is incapable of recognizing anything that happens without naming it in the same breath. The moment of perceiving reality cannot be separated from the moment of interpretation, or, in other words, the moment of creating reality. Even if we want it to seem that way, our brain is not a camera that records something. The performance of our brain is most comparable to the latest virtual reality glasses that you can put on your nose. Like a computer, our brain calculates a virtual reality in real time, which then appears on the screen of our glasses. There we usually see what seems logical and consistent to us based on previous experiences i.e. our reality.

Money is just another of our so-called ‘realities’. We do not deal in real matter; we deal in illusions, in projections. However, this fact is not trivial. Every projection has a practical consequence in terms of the experience it creates. For example, my experience with money seems to support my original definition of money, which gives me the feeling of having evidence that money is indeed what said it was in the first place. Money is not per se what I think it is or what you think it is. It becomes, or appears to become, what one says it is through projection. Projections are circular in nature – they trap us in a hall of mirrors.

Incidentally, the fact that we have projections is not problematic. Projections are a normal and indispensable phenomenon of being human. Projections are our method of wresting meaning from meaningless events and sensory impressions. We cannot not create projections. Moreover, when applied consciously, the process of projection is precisely how we manifest our visions and intentions. When we project consciously, our projections become a tool and facility for our use.

However, when we are not conscious of our projections, which is in many instances the case, things appear to be happening to us as though being caused by external reality or nature, whereas we are actually causing them ourselves, without being conscious of this. This puts us in a state of conviction of a reality beyond question, which is an illusion. We have the feeling of being used by or being enslaved by money. Not only can we then succumb to our personal illusions, but the more other people share these illusions with us, the more real they seem. It’s a true case of the emperor’s new clothes. In terms of money we will say something like, “Money makes the world go around”, unaware that it’s we who make this world go around, maybe in ways that we don’t particularly like or agree with, and think someone else or something else, like money, is the cause.

Basically, there are three different types of projections:

The first type is characterized by unconsciously projecting negative qualities or attributes onto money.

Someone with projections of this type might complete the sentence ‘money is…’ with statements such as ‘money stinks, money is dirty, money means responsibility’.

People with these types of projections onto money suffer from the illusion that they have to earn their existence with great effort: money either does not find its way to them from the beginning or it slips through their fingers.

On an unconscious level, people with what we shall call ‘negative projections’ try to avoid money or to get rid of it because they do not want all the negative attributes associated with money in their lives.

The theme that runs like a common thread through the lives of these people is financial hardship and the constant struggle for sufficient resources.

Through their unconscious negative relationship with money, money predictably flows out of their pockets into the pocket of people with the second type of projection.

The second type is characterized by unconsciously projecting positive qualities or attributes onto money.

Driven by the gnawing feeling that they can never have enough of the magical substance, all their actions are aimed at accumulating more money and then securing it.

The dark side of their projection is greed. This greed is triggered by the belief that there is something outside themselves and that only they can possess or be with money.

The third type of projections is a mixture of the first two types.

It is characterized by the fact that it alternately — or even simultaneously — projects negative and positive attributes onto money and is driven by them.

People of this type are usually able to make money — but they are not able to keep it with a sense of enjoyment.

As soon as it is there, it melts away before their eyes or they actively give it away. They oscillate helplessly between the two extremes of ‘longing to have’ and ‘not being permitted to have’. They are appalled by their own greed and feel neither comfortable or understood in the company of people with type one, nor in the company of people with type two projections.

If money in principle has a hard time finding its way to you and you often fight for resources, you probably have unconscious negative projections (Type 1) onto money.

If you have money but are often worried about losing it or concerned about how to acquire more, you probably have unconscious positive projections (Type 2) onto money.

And if you earn money but somehow never have any money, if you are often plagued by feelings of guilt and then voluntarily and involuntarily find ways to get rid of money as quickly as possible, then it is likely that you are wavering between the projections of both types, between disgust and greed (Type 3).

And if you are one of those rare individuals for whom money really doesn’t matter, who are just as happy to have money as to give money away, as to have no money as to get money — count yourself lucky and exceptional!

Just in case you are still not convinced that money functions through projection — let’s do a quick experiment. Take two separate pieces of paper. Leave the first piece of paper empty. On the second piece of paper write: ‘I promise the owner of this paper 100 hours of my time’, then put your signature to it.

Now imagine if you were to give one of these notes to another person. Which of the two notes feels more valuable to you?

Presumably the note that says ‘100 hours of my time’ feels more valuable. This note contains a promise. A promise is a projection of an anticipated result in the future. The value of that note exists in your thoughts — and maybe in the thoughts of the person you are giving it to. But just because we can share projections, it still doesn’t become a law of nature!

Since we cannot escape our projections, our goal can only be to become aware of them and to deal with them more playfully.

Maybe you are thinking, ‘Pfff — easier said than done!’ In fact, our unconscious projections are so persistent because our attitude towards money is part of our identity — which is what we will explore in CU*money. If you would like to take a deep dive into your identity as revealed by your relationship with money, join us on the journey.

Sign up for our newsletter to stay informed about future rounds of the CU*money programme.

Manage Cookie Consent
To provide the best experiences, we use technologies like cookies to store and/or access device information. Consenting to these technologies will allow us to process data such as browsing behavior or unique IDs on this site. Not consenting or withdrawing consent, may adversely affect certain features and functions.
Manage options Manage services Manage vendors Read more about these purposes
View preferences
{title} {title} {title}