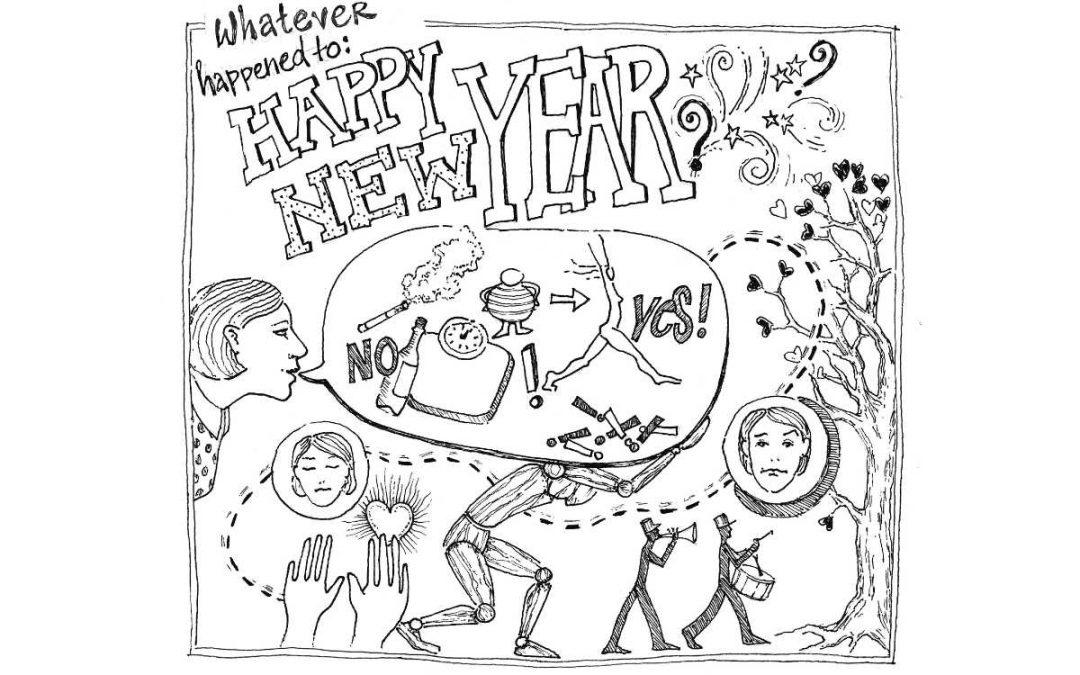 This article was published on Medium on September 15, 2015.

In previous years there was a period off disillusionment with New Year-resolutions that traditionally set in about midyear. Based on conversations with my clients, I noticed that this experience is shared by many. Disenchanted we notice that we again did not

These days, our inner cynic reacts to this lack of results merely with a raised eyebrow. The older we get (and with us, the older our inner cynic gets) the less severe is our disappointment in the face of failure – because by now we know ourselves. But still, there remains a part within us that is deeply disappointed with the crumpled list of goals. Like a small child who still believes in the infallibility of its parents, this part not only hoped but was convinced that, this year, our resolutions would finally become reality.

Looking over the New Year-intentions of the past years I notice that all the “evergreens” (i.e.: the topics that get re-entered into the list every year) seem to fall more often than not into the category of what I believe I “should” do rather than what I “want” to do. For example, it seems that a part of me is still convinced that my inner peace as well as my professional success are dependent on me speaking another foreign language fluently. To learn Spanish is re-entered into my list every year. Likewise, the intention to read or watch all articles, texts and videos that I have been sent by valued colleagues over the course of the past five years is yet another one of my classic evergreen goals.

My attempts to deal with these “shoulds” so far consisted of

I would have succeeded to block out the unused membership with the online language program from my consciousness entirely, if it wasn’t for the fact that the provider has the annoying habit to send me an email every time after they charged my credit card with the yearly membership fee.

Finding a way to ignore my irritating “read!” email folder proved to be more complicated. Every time I open my email program, this folder pokes me in the eye like an accusing index finger. First, I tried to avoid the poking finger by allowing my eyes to only scan very vaguely over my folder structure. Unfortunately, my blurry vision had the unwanted consequence that I wasn’t even able to find folders I was looking for. Hereupon I developed an ingenius solution for my problem that may be familiar to some of you: I moved the folder “read!” into another popular folder, one level further down, called “important documents!”.

It took an enlightening session with my coach (yes, even coaches have coaches) before I allowed myself to release these self-created shackles by simple deleting the “read!” folder once and for all. I did this, knowingly accepting the risk that I might die stupid. Curiously, making the choice to delete the “read!” folder created an unknown sense of liberation in me.

Who would’ve suspected that freedom is so simple to create?

As a transformative Coach I often speak with my clients about there being two primary sources for human motivation: fear and love. If this thesis is true, our New Year-resolutions as well are either driven by fear or love. If the root of our intention lies in fear, then it is often the fear of “not being enough”: not beautiful enough, intelligent enough, educated enough, skinny enough, etc. The direction of movement is one of “away from”. Away from being fat, lazy, uneducated or poor. Fear based goals are therefore “should” goals, because a part of us believes we should be different in order to have the success or happiness we want.

The direction of love-goals, on the other hand, is one of “towards”; a “wanting” driven by a creative force. This is not to mean that intentions or goals based on “away from” are not legitimate. But our “towards” goals usually make us happier and more excited.

As part of my reflection of intentions and goals I realized that my recurring fascination with my “should” goals potentially serves an important function that I hadn’t been conscious of: my “should” goals keep me distracted from dealing with my love goals! This may seem like a strange statement – after all, why would anyone need distraction from a love-goal? Because the perceived stakes are higher: When I really want something, my heart begins to pound and I feel that the risk is higher than to withstand the sneering look of my inner cynic. The strong drive “towards” a love-based goal expresses the longing of a lesser-known part of myself. This part of me definitely feels that failing to deliver on a love-goal would leave much deeper marks on my self-esteem, then yet again failing on a “should” goal.

But what does failing even mean? I remember a quote by Thomas Edison who, in respect to the time-consuming development of the light bulb, supposedly said “I did not fail. I merely discovered 1000 ways of how it will not work.” Based on this definition, failing means to have tried for real, to have waged something – and to have realised that it hasn’t worked yet. By comparison it appears to me that what we often describe as failure is not much more then a euphemism for not having tried at all. We waged nothing, nothing was at stake – all out of the fear that in the end we might fail. Grand failure accompanied by much fanfare and real feelings, has little to do with the phlegmatic capitulation of our inner “couch potato”.

If I am honest, I am a good example of a person who has never dared much at least not more than what I still deemed “safe enough”. I kept my big love-goals secret, even before myself. But even my relatively small and timid attempts to give my inner longing more room still proved two things: a) the much feared experience of failure was ultimately a lot less disastrous than anticipated, and b) the mere fact that I started to act on something propelled me forward and broke the spell of my apathy.

So, this year, I announce my love goals loudly to the world, ready to fail beautifully – but potentially also opening the door to success. My declared love goals for this year were:

The year is not over yet – but I already know that I failed beautifully in respect to one of them: I did not win Amanda Palmer to write my introduction. I don’t however regret having tried! Because I left my comfort zone and asked, I am much more likely to make a bold request in the future. My second love goal is in the working and I will have made good progress by the end of the year.

To this effect I invite you to review your list of new years resolutions for this year: how many fear-goals do you have on your list and how many love-goals do you carry in your heart that you have not written down?

And what might happen if you threw yourself with abandon into realizing one of your true love-goals?

Manage Cookie Consent
To provide the best experiences, we use technologies like cookies to store and/or access device information. Consenting to these technologies will allow us to process data such as browsing behavior or unique IDs on this site. Not consenting or withdrawing consent, may adversely affect certain features and functions.
Manage options Manage services Manage vendors Read more about these purposes
View preferences
{title} {title} {title}